I was back in Paris for a few days at the end of last year, and since there was still room in my equipment bag, I pulled my old and battered Leica CL from a drawer and took it with me. A good opportunity to check whether I could get acceptable results out of it this time.

I never was a rangefinder guy. When I started being interested in photography, semi-automatic Single Lens Reflex cameras (SLRs) were already the norm, and Leica an expensive brand of obsolete cameras. My formative years were spent with a Pentax MX, and I’ve always found natural to see the world on the matte focusing screen of a reflex camera. But I was intrigued by the Leica legend, and one day, purchased a Leica CL. Over the last 15 years, I used it rarely, but being light and compact, it could find a slot in my equipment bag from time to time.

The CL was a sort of entry-level rangefinder camera, designed by Leitz in Germany and built by Minolta in Japan from 1973 to 1976.

From a technical point of view, it is a miniature M5, and very advanced for a Leica of its time. A semi-auto camera with through the lens metering, it used a mechanism very similar to the system used in the much maligned M5’s.

After the CL and the M5 were abandoned in the mid seventies, Leitz reverted to fully manual cameras with no metering capabilities, and aficionados had to wait for another 10 years before a semi-auto rangefinder camera was proposed again by the German firm.

With its M bayonet mount, the CL could use the 50 mm lenses of its bigger brothers, but Leitz had also designed two lenses specifically for the CL, a 40mm Summicron (F:2) and a 90mm Elmar (F:4).

A true Leica, it also used a focal plan textile shutter (1/2 sec up to 1/1000 sec). The rangefinder has a short base and is not as accurate as the M6’s, but is good enough for the 90mm Elmar.

With its mechanical shutter, the CL only needs a battery for metering, and uses it sparingly. Mine still has the mercury battery I bought it with, but I suspect it must be at the end of its life, because the recommendations of the metering system were so bizarre that I decided to forget about it and apply the “sunny 16” rule. With a battery in working order, the determination of the exposure is very simple (a match needle at the right of the viewfinder).

On the CL, the image in the viewfinder is large and clear. The viewfinder has a greater field of view than the 40mm lens normally mounted on the camera, and projected bright lines show to the photographer what the actual picture will look like. There is little difference between the respective field of views of the viewfinder (similar to a 35mm) and of the 40mm lens, but the bright frame projected of the 90mm lens will seem minuscule at the center of a viewfinder, whose enlargement factor does not change. Disconcerting, but not dramatic.

What really requires adaptation is focusing. On a manual focus Single Lens Reflex camera, the image of the subject is projected on a matte ground glass, and the photographer can see immediately whether the image is in focus or not. Similarly, with tele-zooms used at large apertures, the effects of the reduced depth of field are easily visible, and the photographer can visualize what will be in focus, and what will be pleasantly blurred.

On a rangefinder camera, the finder does not provide any feed-back when it comes to focusing. Every element of the image seems in focus: it’s very easy too forget to set the focus, and very difficult to predict the depth of field.

The coupled rangefinder is materialized by a small window at the center of the viewfinder. It’s extremely accurate, but the focusing ring on the small lens is narrow and rather stiff, and you get the impression that you could have reacted much faster with the large focusing ring of the 50mm lens of your SLR.

I guess it gets better with experience, but it’s very frustrating for a beginner.

If you can get over the idiosyncrasies of the viewfinder, the Leica experience is very rewarding. The camera is virtually silent, and being small and black, gets totally unnoticed. The pictures are sharp, with a lot of micro-contrast, and give the impression of being of higher quality than the images taken with most of the SLRs (provided you could master the focusing system). Your success rate will be lower than with a manual SLR, and far lower than with a dSLR of the latest generation, but when the images are good, they’ll be very good.

Rangefinder cameras are markedly different from SLRs, and will not produce good pictures without some serious practice. The first attempts will be frustrating, and there is no point in spending a lot of money in a Leica M9 if you discover after a few days that you’re totally allergic to this style of cameras.

The Leica CL is one of the cheapest options for a photographer who would like to try rangefinder cameras. Good Leica CL are rather easy to find in the US or in Europe. Even in a pristine condition, they never cross the $1,000 threshold, and nice items can be found between $300 and $600. In Japan, the CL was sold as a Leitz-Minolta camera, with no other difference with the “Leitz only” CL than the logo.

A few years after the production of the CL was stopped, Minolta launched the CLE, an automatic exposure version of the CL, and the first camera to propose On the Film (OTF) flash metering. There is no semi-auto or manual mode. The CLE contains much more electronics than the CL, and it can not be repaired if the main circuit decides it had enough. The CLE is much more difficult to find than the CL. Expect to pay $600 for a nice one, and thousands for collector editions.

Full size M series Leica are either more primitive (no exposure metering) or more recent and significantly more expensive than the CL. Even in poor condition, a Leica M6 can not be found for less than $1,000. Cosina is still producing a line of rangefinder cameras, sold under the Voigtlander brand, and available with Leica M lens mount as well as less common mounts such as the Nikon and Contax rangefinder mounts. Amongst all the the rangefinder cameras from Voigtlander, the Bessa R3M is the closest to the CL (it accepts the same 40 and 90mm lenses), and can be found between $400 (used) and $600 (new).

“What camera took these pictures?”

That’s the question that photographers hate the most. Nobody ever asked Picasso what type of brush he was using to paint “Guernica”, and photographers believe they are the ones taking the pictures. For them, their camera is just a tool, that they use it to communicate their vision.

Well, it’s not completely true. Granted, the camera is a tool, and tools don’t create. But the camera’s characteristics, its size, its weight, its ability to withstand adverse environmental conditions, the number of manual steps needed to take a picture, the performance of the shutter, the aperture of the lens, all limit the ability of the photographer to take a usable picture of what he’s witnessing, or to convert his vision into an image. Every now and then, a breakthrough in the design of cameras gives photographers more opportunities to report what they see. Whenever a new generation of cameras hits the market, photographers start experimenting, and in the process, harvest a new crop of pictures, which sometimes, will change the way they show the world to the rest of us, and ultimately, change the way we all see the world.

Few cameras had an impact comparable to that of Leica cameras’ in the first half of the 20th century. The originality of Alessandro Pasi’s book – “Leica, Witness of a Century”, is that it’s an attempt to show how the Leica changed photography, and how photographers still use it today to make different pictures.

Alessandro Pasi’s book is organized is six chapters, each covering a different period, and showing in detail the most emblematic Leica camera of the era, as well as the pictures taken with it by the most prominent photographers of the time.

There will be no striking discovery for the well learned Leica aficionado. The cameras shown here have already been described in detail in many books, and at least half of the photographs assembled by Alessandro are well known “classics”.

But the author also included less known pictures taken by Italian photographers, as well as family snapshots taken by amateurs over the course of the century.

The texts are well written and informative, the layout is clear and the pictures are always given the priority.

This book is a very good illustration of the saying about the whole being greater than the sum of its parts.

It’s a pleasant voyage through one century of photography, an homage to the ingenuity of the creators of the Leica, and the proof that sometimes, “what camera took these pictures?” is not as stupid a question as it sounds.

For the 75th anniversary of the Leica, in 1989, the Leica Camera Group published “75 Years of Leica Photography”, which showcases more than 300 pictures taken with Leica cameras, from the test shots of Oscar Barnak in 1914 to the fall of Berlin wall in 1989. A very interesting follow up if you liked Alessandro’s book. It can still be found – used – for a bit less than $100.00

With its 24x36mm 18 Mpixels sensor, the M9 will be positioned in the same price category as the Nikon D3X and the Canon 1DS Mk III, both proposed above $6,500.

As far as I know, no price has been published for the North American market yet, but the list price published for the UK and for Continental Europe leads me to believe that the M9 will sell somewhere between US$6,750 and US$7,500 on this side of the Atlantic.

That’s a lot of money. I’m not a Leica collector, or a pro photographer always looking for ways to produce different images. I’m just an amateur, taking a few thousands of pictures per year, most of them in situations where a single lens reflex is far more efficient than a rangefinder camera like the M9. And I could not help doing some math:

I would not even use a M7. Leicas are about street photography, the smaller, the better. An old Leica CL (or even better, its Minolta sibling, the CLE) is not as prestigious as an M7, but it does the job. For $400. How many more pictures? 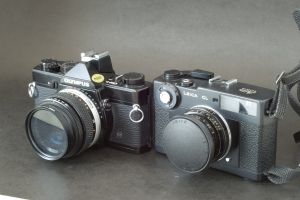 For a given generation of camera, manual exposure models are almost always worth more than their automatic exposure siblings.

More after the jump