I published a blog entry on $5.00 cameras a while back, and now I have two extra SLR bodies and a lens to add to my league of fivers. I recently became the proud owner of a Canon EOS 620 for $4.95 (nobody seems to like first generation auto-focus SLRs) and of a nice Canon EF 28-70 F3.5-4.5 zoom, (the hidden part of a bundle with the very first generation EOS camera, the EOS 650: $8.95). They both seem to work well and the lens is …pristine.

Generally there is not much in terms of a bargain on shopgoodwill.com : as opposed to eBay where the sellers are independent entrepreneurs competing for your dollar, Shopgoodwill is a sole source marketplace.

On eBay, sellers have to describe the piece of equipment they’re offering in detail and the buyers are protected by the feedback mechanism. On Shopgoodwill, item descriptions are minimalist, and the equipment for sale is almost always “untested, sold as-is”.

I suspect that because purchases at Goodwill can be easily disguised as tax deductible charitable contributions, lots of buyers are not really sensitive to prices, and end up paying a lot for a poorly described and untested piece of equipment. As much as they would pay on eBay for an equivalent camera, but without  the implied warranty of a seller or the support of eBay if things go south.

Lastly, considering that cameras and lenses are sold “untested and as-is”, the risk of buying a lemon is pretty high – if a camera is known for a weak point (fragile shutter curtains, short lived capacitors, temperamental electronic shutter release, for instance), it’s safe to assume that the item for sale will be plagued with it. Even if it looks “pristine” cosmetically. 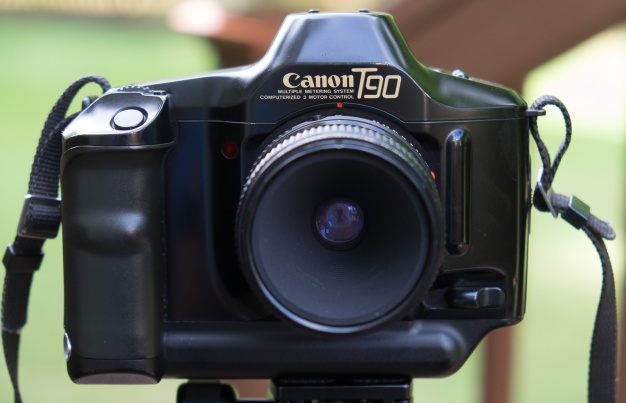 I would not buy a camera from a series with a known weak point on Shopgoodwill – far too risky. I would buy it from a seller with a great reputation on eBay.

In my opinion, there are only two ways to score a good deal at Shopgoodwill: buy for cheap something that absolutely nobody wants but that has value for you (a first generation AF cameras for instance if that’s your fancy), or buy a poorly documented bundle, whose perceived value is dragged down by a very disserving description. Imagine an item advertised as “Nikon N4004 + Sears lens” or “Olympus film camera with broken lens”. Nothing to grab the attention of the casual browser. But if you look carefully at the pictures, you notice that only the lens cap is from Sears, and that the lens looks like … a recent Nikon AF-S lens. Or that the Olympus camera sold with the broken lens is a rather rare (and sought after) OM-2000 in seemingly pristine condition.

How is it possible? With a few exceptions, the people who write the item descriptions at Goodwill know nothing about photography, and don’t have time to check or research.

More about my first Canon EOS cameras and how they compare to Nikon’s best in a few weeks.