Difficult questions. First, you would have to agree on what constitutes exactly a “real” 35mm camera, or a “real” 35mm SLR, and then, you would have to determine what really counts: is it presenting a prototype at a trade show, applying for a patent, launching a limited series production, or inundating the world with tens of thousands copies of a “game changing” camera?

It is generally recognized that with the Leica, Leitz created the first commercially successful 35mm camera in the early twenties, and but it was not until 1932 when they launched the Leica II that the rangefinder camera with interchangeable lens had found its “real” final form.

1932 is also the year when Zeiss launched Leica’s most serious pre-war competitor, the Contax.

Zeiss was at that time the largest manufacturer of cameras in the world. They had a long tradition of innovation and a great team of engineers; conscious of the limitations of the rangefinder formula, they kept on working on a better solution until, after the war, they finally presented the Contax S, one of (if not the first) modern 35mm single reflex lens camera.

With its pentaprism, its horizontal curtain shutter and its 42mm screw lens mount, the Contax S was very close to the typical 35mm SLR design, and should have been commercially successful.

But at that time, the Zeiss factories were in the Russian occupation zone (soon to become the German Democratic Republic) and all sorts of issues slowed down the roll-out to production: the Contax S only started to be mass produced at the very end of 1949. The launch of the Contax S also coincided with the start the Cold War – products from communist countries were not always welcome on the more affluent markets of the West – and to make the matters worse, the East German entity of Zeiss lost the rights to the Contax name in 1956. After considering multiple options (including apparently the “Pentax” name), the East Germans rebranded their cameras “Pentacon” (a portmanteau for Pentaprism and Contax) and the Contax S line of SLRs was abandonned.

Why is a pentaprism so important, that Zeiss and (later) Asahi changed the name of their cameras to include “Penta”?

Composing a picture on a piece of ground glass located behind the lens is nothing new (plate cameras have been following that model forever), but the image is reversed top-bottom and left-right, which makes the composing process very slow and totally unsuitable to candid photography.

If a mirror inclined at 45 degrees is placed behind the lens, and the image projected on a piece of ground glass, it is not reversed top/bottom anymore, but is still reversed left/right. The photographers has to shoot from waist level, after having used a magnifying glass for focusing. It’s workable, but not the best formula for action shots,  journalism or simply spontaneous family photographs.

Nikon F3 with its HP Viewfinder 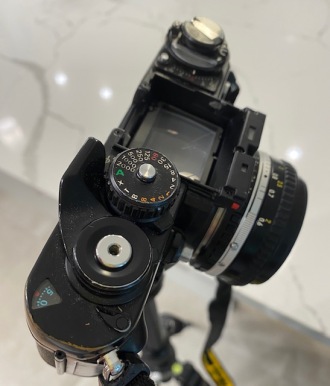 Nikon F3 with the viewfinder removed

the (huge) prism of the Nikon F3’s viewfinder

The pentaprism addresses all those issues – and as we all know from experience  with SLRs, the image is fully redressed, focusing is easy, and eye-level composition makes action photography intuitive even for beginners.

Asahi started manufacturing lenses in Japan in 1919, and launched the first Japanese 35mm single lens reflex camera – the Asahiflex – in 1952. It was inspired by the pre-war German Praktiflex, but brought some improvements:  it had two finders: a waist level through the lens viewfinder (for focusing)  and a smaller eye level optical viewfinder to be used when taking candid snapshots.

In two critical areas, the Asahiflex was not as advanced as the Contax S:  it did not have a pentaprism viewfinder, and it used a narrower 37mm screw mount.

Asahi’s first major innovation came two years later with the introduction of the instant return mirror on the Asahiflex IIb (1954). The IIb was without equivalent for a while, but the step forward it represented was nothing compared to Asahi’s next giant leap, with the “Pentax” of 1957. The first (mass produced) Japanese camera with a pentaprism, it combined for the first time in a compact, elegant and well made camera the instant return mirror, the film advance lever, easy film loading with a hinged back, and the 42mm screw mount.

The Pentax line of cameras sold by the millions and became the model that all other manufacturers would copy in the subsequent years. The Pentax name became so well known that the Asahi Optical Co. decided to sell all its products (including its line of medical equipment) under the name Pentax, before it finally changed its own name to Pentax Corporation in 2002.

It is widely assumed that  “Pentax” is also a portmanteau for Pentaprism and Contax. According to Wikipedia, the name was purchased  by Asahi from the East German Zeiss  company just before the launch of the original Pentax SLR in 1957.

Today, the single lens reflex formula is on its last breath – superseded by mirrorless cameras where the pentaprism has been replaced with a high resolution LCD – the Contax brand is dormant, and Pentax, as a subsidiary of Ricoh, is in life support with a line of three rather old dSLRs and no plan to launch a mirrorless system.

By far the most comprehensive source about Pentax cameras, as well as early SLRs of all makes: Pentax-slr.com

From a Pentax to another Pentax…